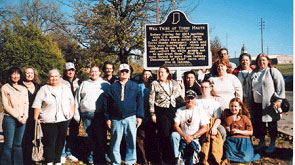 Descendents of Jacco Godfroy attended the 2004 dedication of the Wea Tribe at Terre Haute historical marker (photo courtesy of the Indiana Historical Bureau). 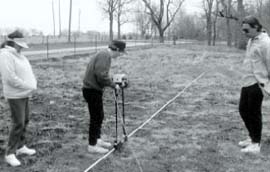 Dr. Mark Schurr, a University of Notre Dame Archaeologist, demonstrates the use of non-invasive technology on an archaeological site to Native Americans in the Prophetstown State Park area.

Indiana was the historic homeland of many Native American tribes including the Shawnee, Miami, Wea, Potawatomi, Delaware, Wyandot, Kickapoo, Piankashaw, Chickasaw and others. These tribes were removed from the state through a series of treaties in the late 18th and early 19th centuries. Several of these tribes still maintain a strong presence in Indiana:

Citizens from more than 100 different tribes and cultural groups live in Indiana today. They have vibrant cultures, traditions, and languages (some web resources about Native American languages: Miami, and Potawatomi.)

While the DHPA currently does not have an active program promoting or researching present day Native Americans living in Indiana, one of our partners in preservation, the Indiana Historical Bureau, provides information on its website regarding Native Americans living in our state. Along with the Historical Bureau, the State of Indiana also has the Indiana Native American/Indian Affairs Commission, which studies and makes recommendations to appropriate federal, state and local governmental agencies in areas of concern to our state's native and non-native people and communities.

At the federal level, the Bureau of Indian Affairs offers information about services available from the federal government, programs, and resources for and about Native Americans.

Various Indiana museums discuss the history and impact that Native Americans have had not only on Indiana, but also United States history.