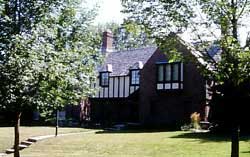 At the turn of the century, American architects sought new sources for architectural styles. Many 19th century styles were based on various past architectural movements, but during the early 1900s, builders chose from many exotic artistic influences. Some architects were inspired by America's past.

Colonial Revival - Features To Look For:

Tudor Revival - Features To Look For:

The Tudor Revival style was also very common in Indiana during the 1920s. As its name implies, this style was inspired by 15th and 16th century English manor house architecture. As with the Colonial Revival, this style was almost exclusively used for houses. Tudor Revival homes had rambling, picturesque plans and steeply pitched roofs. Brick with contrasting patterned stonework was a common wall material. Builders often stuccoed upper gable areas and divided them with wood strips, in imitation of medieval half-timbered construction. Entrances or openings were often marked by a broad pointed (Tudor) arch. Large bay windows and banks of casement windows were typical on Tudor Revival homes. This style was popular for small as well as large residences.

The Spanish Eclectic style was a more elaborate twist on the early Mission style and incorporated elements borrowed from a variety of other cultures, predominantly Spanish and Italian. Although known prior to 1915, it was the Panama-California Exposition, held in San Diego that year, that gave the style more widespread attention. Architect Bertram Grosvenor Goodhue designed a series of buildings surrounding 1400-acre Balboa Park, site of the Exposition. The marketing of the Exposition itself, combined with the vast numbers of visitors, helped to disseminate the style. Spanish Eclectic architecture experienced a rise in popularity particularly during the 1920s and early 1930s and dwindled during the 1940s. This style was mostly found in the southwest, especially California, and in Florida. Eventually the style became popular for resort communities due to its exotic, almost fantasy-like feel. Theaters were often designed in the Spanish Eclectic style. It was thought that the romanticism and flair of the style was a natural partner for the movies one would experience within. The style can also be found in residential architecture as well as a variety of institutions.

The French Eclectic style occurred at roughly the same time as the Spanish Eclectic style and experienced a similar lifespan (1915-1945). Found predominantly in 1920s and 1930s suburbs, the style was utilized most often in residential architecture. The French Eclectic style emerged from an increased knowledge of French architecture. American soldiers, who had served in France during World War I, returned home after having traversed the country and seen the buildings themselves. Also, there were more photographic studies of French houses published, giving architects and builders more variety in their designs.