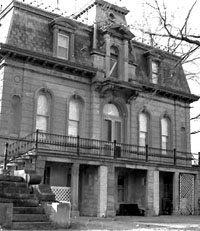 Historians named this style for the reign of Napoleon III of France, that country's second emperor. It was a contemporary style, then popular in France. In Second Empire buildings, the most obvious distinguishing characteristic is the mansard roof, called a "french roof" by American builders. Prominent dormer windows, a wide entablature with brackets and various elaborate window treatments were typical of this mode. Architects borrowed many details from the contemporary Italianate style. Plans ranged from balanced, classically-influenced types to picturesque designs with prominent towers. This style was used for large public structures as well as mansions. Shopkeepers sometimes chose the style for their commercial buildings. Second Empire homes tend to be large mansions, but smaller cottages were erected in this mode. This style was most common in Indiana from about 1860 to 1885.