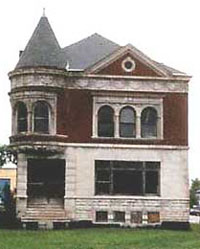 Victorians used this style mostly for residences and occasionally for commercial buildings. By combining motifs from medieval and Early Renaissance architecture, builders created one of the most popular late 19th century styles in America. Inspired by the work of English architects, the style first appeared in the United States in 1876, when the English made several “Queen Anne” display halls for the Centennial Exposition in Philadelphia.

If one feature is characteristic of the Queen Anne style, it is variety. Queen Anne homes feature an irregular silhouette with front facing gables, and large open porches. Roofs are steeply pitched hip types with irregularly placed gables. Surface texture was important to this style. It was not uncommon for an architect to combine patterned wood shingles, clapboards, half-timbering, and stucco on one building. Often, masonry and wood siding were combined on the same structure. Circular towers or semi-circular bays were common on larger houses. Porches supported by lathe-turned posts were typical and often wrapped around to one side. The Queen Anne style was widely used in Indiana from about 1880 to 1910. Although often associated with large homes, carpenters built thousands of small standardized Queen Anne cottages in Indiana during this period.