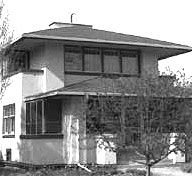 Unlike the previous styles, followers of this movement rejected all historical styles in favor of a modern, functional approach. Frank Lloyd Wright (1869-1959) was the most renowned figure of the Prairie School. Wright called for houses that fit into the landscape, built from materials of the local landscape. The flat grasslands of the Midwest plains inspired Wright to eliminate steep, showy, Victorian forms. The emphasis was on horizontals. Wright and his school did not often use curvilinear forms, instead, rectilinear shapes and plain walls with banks of casement windows were favored.

The Prairie Style was used mainly for houses. The ideas of Wright and his followers were radical; many possible clients did not accept them and he built only two Prairie Style houses in Indiana. However, a number of Indiana builders and architects incorporated Wright's ideas into their bungalows and American Four-Square designs (see Bungalow or Craftsman Style). Hoosiers maintained an interest in the Prairie Style from about 1900 to 1920.