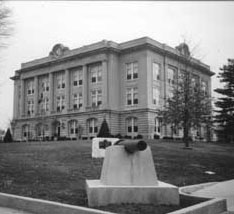 America's interest in classical architecture was reborn in the 1890s. Hoosier civic leaders thought that classical architecture would symbolize authority and culture for their growing cities and towns at the turn of the century. The Neo-Classical Revival style is similar to the much earlier Greek Revival style; however, it differs by its use of elaborate classical detail, usually more permanent materials (brick, stone) and more massive scale. Architects frequently combined elements from Greek, Roman, and Italian Renaissance architecture into one design.

Government, civic institutions, and wealthy homeowners selected the style for public buildings, institutional structures, and larger residences. Businessmen did not often choose the Neo-Classical Revival style for their commercial buildings, although banks were often built in the style.

The Neo-Classical Revival style is identified by its use of Greek and Roman architectural elements, such as columns, pediments, and round arches. Plans and exteriors are usually symmetrical, with entrances or perhaps wings projecting from the main structure.

The Neo-Classical Revival was most popular from 1895 to 1940 in Indiana. Several related styles were also popular in Indiana in the early 1900s. Advocates of the Beaux-Arts style (named after the École des Beaux-Arts, an architectural training school in Paris) emulated a very bold, ornamental classicism. The Renaissance Revival style was a readaptation of European Renaissance era buildings.