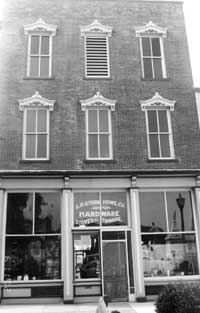 Of all the styles of the 19th century, the Italianate style was one of the most common in Indiana. As the name somewhat implies, Italianate architecture was a fanciful reinterpretation of Italian Renaissance architecture. The style was initiated in England in the early 1800s.

Italianate buildings were most often asymmetrical in plan, but occasionally, owners chose a more formal, balanced plan. A wide entablature with heavy scroll brackets supporting wide eaves identifies most Italianate buildings. Windows were tall, narrow and often half-rounded or segmentally arched on top. Some were surmounted by ornamental stone or pressed metal hood molds. Architects distinguished large houses and public buildings with high towers, inspired by the bell towers of the Italian countryside. Walls were built of clapboard siding or brick with stone detailing. Porches were very common on Italianate homes; they featured chamfered posts and bracketed cornices. In Indiana, the Italianate style was most popular between 1855 and 1890. Unlike other late 19th century styles, Hoosiers selected the Italianate style for all kinds of buildings, including commercial and industrial structures.