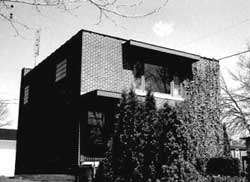 Features To Look For:

The International Style was the most severe of the modern styles. Although pioneered by European architects shortly after World War I, Americans did not accept the style until the mid 1930s. The Bauhaus, a German design and architecture school, had great influence over the development of the style. There are not many examples of International Style buildings in Indiana. This style was used primarily for high-rise office or apartment buildings, and seldom for homes.

International Style designers completely rejected the architecture of previous eras as a basis for design, turning instead toward a completely modern approach for buildings. Decoration or ornament in the traditional sense was also rejected. Architects treated walls as flat, plane-like surfaces with no decorative treatment, placing windows flush to the exterior. Large windows emphasized the non-traditional look of International Style buildings. Most Indiana examples of this style were built between 1930 and 1950.