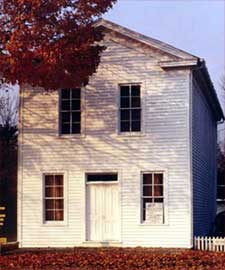 The Greek Revival style was most popular in Indiana from about 1840 to around 1860. In both France and England, architects created buildings which had heavy temple-like exteriors in the late 18th and early 19th centuries, rather than the delicate classicism of the previous Adamesque period. American builders, architects, and home owners caught on to the style from European sources. Generally, the style emulated the temple forms of ancient Greece, resulting in the creation of straightforward, box-like buildings. In smaller domestic structures, carpenters created simple ornamentation. Most Greek Revival buildings have evenly spaced, multi-paned windows and entrances marked by sidelights and rectangular transoms. Substantial cornices often extended into gable ends as "returns." Roofs were low pitched gables, similar to those of classical temples. Columns and pilasters proportioned to imitate ancient forms appear on larger Greek Revival buildings. Nearly always, the bolder forms of the style contrast with the lighter delicacy of the Federal style.

The style was used for many different building types, ranging from county courthouses to modest farmhouses. The simplicity of the style made it practical, but it was philosophically attractive also. Many Americans considered their nation heir to the democratic principles exemplified by ancient Athens, to them it was natural that American buildings should look like those of ancient Greece.