The Department of Natural Resources, Division of Historic Preservation & Archaeology (DHPA) worked with several key archaeology partners in 2008 to propose an inventory of the reported and known pre-European-contact Native American mounds and earthworks sites throughout the state. 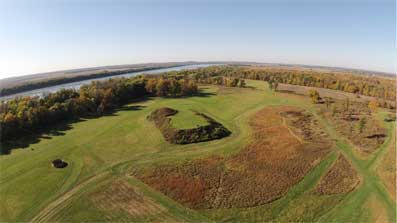 Earthworks are Native American constructions that are systematically formed into mounded walls and elevated areas.

Mounds are constructions that are elevated and can be tall and conical, low and rounded, or even flat-topped. They can be made of earth, shell, or stone.

Enclosures generally feature a bank and ditch construction, can be circular, rectangular/subrectangular, or geometric in shape, and usually feature at least one entrance or gateway through the bank.

Earthwork complexes are groupings of enclosures and/or mounds in proximity to each other.
All of these earthwork types had ritual and/or mortuary functions. But these functions may have differed between feature types and in different locations. 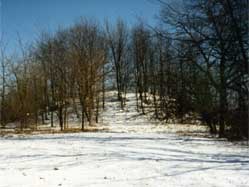 This inventory resulted in the documentation of 1,183 sites that contain at least 2,100 individual earthworks. This project was entirely a search of records and literature; no fieldwork, survey, or investigation was performed. The inventory showed that virtually all of Indiana’s earthworks have been damaged by uncontrolled digging and various agricultural and construction activities. Most of the sites need additional investigations to record more precise locations and to document their current conditions since many of them have not been visited by an archaeologist in several decades. Additionally, few of the earthworks have excavation data that allow for a determination of age and cultural affiliation.

Documentation of Indiana’s earthworks began as early as the 1790s and shows that mounds and other earthworks are found in almost every county. Several patterns in the records are apparent.

Overall, these patterns reveal that earthworks within the state are very poorly documented. 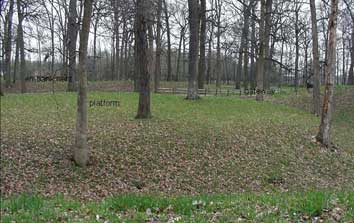 Where to go from here

DHPA continues to maintain and update the inventory of Indiana’s mounds and earthworks.

What can you do?

Where can you learn more?

Archaeologists responsible for the statewide research were from:

The Preserve America program is a federal initiative that encourages and supports community efforts to preserve and enjoy our priceless cultural and natural heritage. The goals of the program include a greater shared knowledge about the nation's past, strengthened regional identities and local pride, increased local participation in preserving the country's cultural and natural heritage assets, and support for the economic vitality of our communities.