Indiana Law mandates our fire responsibilities. Indiana Code 14-23-5-1 states that "The department, acting through the director and the state forester, shall establish and equip a firefighting organization within the Division of Forestry for the purpose of detecting, preventing, fighting and controlling fires on state forest lands." The code goes on to state that "The department may extend the same fire detection, prevention, fighting and control services thus established to other state lands under its supervision and control. The department may also establish such services for lands not owned by the state and not lying within the corporate limits of any city or town for the purposes of protecting the forests, fields and grasslands of the state." Other sections of the law deal with establishing and training a "volunteer forest firefighting service" and "authority to cooperate with the federal government and to receive benefits, aid and grants."

The Division of Forestry assumes Wildland fire responsibilities on approximately 7.328 million acres of forest and associated wildlands. This figure resulted from a study conducted by the U.S. Forest Service in the early 1970s. The acreage 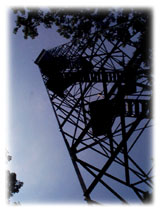 breakdown between forest and associated Wildland was partially re-verified by the 1986 statewide forest inventory. When the Fire Warden System was disbanded (late 1950s or early 1960s) the division reorganized to its current fire staffing structure. Due to our limited staffing and the emergence of a stronger rural fire service, Forestry's role regarding Wildland fire has changed. We have become a "support" agency regarding fire. Today, roughly 95 percent of all Wildland fires in Indiana are suppressed by rural and volunteer fire departments. Our fire programs are thus geared to support an already existing fire service. Through cooperative mutual aid agreements, the division is able to secure fire protection for most DNR properties, as well as other state and federal lands. This constitutes significant savings to the state of Indiana. Funding sources for our fire operations come from the division's operating, preventative maintenance (PM), and construction rehabilitation and repair (CR&R) funds. We also receive federal funding for State Fire Assistance (SFA) formerly Rural Fire Prevention and Control (RFP&C) and Volunteer Fire Assistance (VFA) formerly the Rural Community Fire Protection (RCFP) grant monies. The Division participates in National Mobility (all-risk management) operations through a cooperative agreement with the USDA Forest Service, State and Private Forestry.

The Indiana Department of Natural Resources (DNR), Division of Forestry, Fire Management Program provides organizational, operational and technical support regarding wildland and prescribed fire management. This support extends to all Division of Forestry lands, and may be extended to other DNR-controlled lands and to all lands outside incorporated cities and towns.

1905 – The General Assembly passed the first Indiana Fire Laws.
1919 – The various boards, including that of Forestry, were consolidated into the Department of Conservation.
1927 – Power was given to the Division to detect and suppress fires on private land, using money from the Forestry fund.
1929 – The Clark-McNeary Fire Law was approved by the State Legislation and brought in federal funds that could be used for fire suppression.
1931 – Legislature authorized state funding for fire fighting.
1933 – Established the Emergency Conservation Work program and the CCC.
1934 – First coordinated fire prevention programs begin.
1935 – Fire wardens were appointed and the first fire school was held.
1936 – New fire organization within Division of Forestry formed.
1942 – Forest Fire Fighters Service (FFFS) was organized in Indiana.
1943 – Indiana Defense Council helped organize and train volunteer Civilian Defense Forest Fire Fighters during World War II.
1947 – Forestry Fund amended to include fire funding.
1954 – Division is able to procure fire equipment through the Federal Excess Property Program.
1964 – First Fire Coordinator appointed for the Indiana Division of Forestry.
1965 – The Indiana Department of Conservation became the Indiana Department of Natural Resources.
1976 – Dispatched the first out-of-state crew to assist with national fire fighting efforts
2019 – Celebration of 75th Anniversary of Smokey Bear and Fire Prevention.