From the Director
WINTER WONDERLAND
THE WILY, HELPFUL COYOTE
TAKE A BOW

BE QUIET; GET OUTSIDE

Imagine you're in the woods, walking along a snowy trail as more flakes fall, gradually covering the route ahead and your footsteps behind.

Did you hear that? There's really very little sound, and that's my point. Winter hiking - or just being outside in the winter for a walk - has its own special appeal.

One of the main things I like about being outside in the cold weather is the relative silence. In a strange way the quiet creates a sense of place, as if you are truly all alone in the outdoors.

This is especially true when there is snow on the ground - until you come across animal tracks, and you realize you may have company, though not of the human kind.

Empty woods or prairies can be really quiet, which broadens my senses and forces me to focus on the overall setting. I find that being by the moving water of a stream or river in winter is even more appealing. The sound of the water seems to be even more mesmerizing than in other seasons, perhaps because there so little else to distract me.

To really get into this feeling, consider a winter camping or cabin trip so you can have easy access. Check stateparks.IN.gov/9655.htm to see what's open and to make a reservation.

Yes, the more physically demanding winter pursuits are great, and I enjoy those, too. But remember also that this is a great time to just pause while you are outdoors. You don't need to do anything action-packed. Just get some fresh air, exercise and peace.

And embrace the sounds of silence.

Yes, Indiana winters can be a time for some folks to stay inside with a cup of hot cocoa, a good book, and a roaring fire, day after day and night after night, waiting for the first day of spring.

But for a growing number of others, the snow and cold is a welcome invitation written in bold gold lettering.

Its words are simple: Come out and play.

More and more people are accepting that request without a second thought.

Traditionally, winter has been somewhat of an offseason at many DNR properties, but lately they've been getting more cold weather business. First Day Hikes draw hundreds each New Year's Day, but they are far from the only winter activities DNR properties offer. Birding and wildlife watching, snowshoeing, cross-country skiing, and sledding can be done at most, from state parks to state forests, and most provide some version of hiking, which, in winter, can be a much different experience compared to doing so in other seasons.

Cutline: If you love snow, Pokagon State Park is the place to go in northeast Indiana for winter-time fun. Photo by Frank Oliver.

HOW AN INJURED BALD EAGLE GETS BACK TO THE WILD
Understanding these creatures will help you coexist with them
By Scott Roberts, OI staff

Despite the typical plot of an episode of a certain classic cartoon series, coyotes don't buy Acme products, nor do they set elaborate traps to snare roadrunners.

While those points may be obvious, many people still hold a slew of misconceptions about these mammals that are less so, but equally as fictitious.

Coyotes have been maligned as a threat to children, pets, and ways of life.

That's not the case, except in rare circumstances, yet myths about the species persist for several reasons. These include their naturally cautious behavior, the fact they are usually seen during dawn and dusk, and because most people, in general, don't know enough about them.

There's also their resemblance to wolves, but that shouldn't bother Hoosiers - there haven't been wild wolves in Indiana since the early 1900s, according to DNR furbearer biologist Geriann Albers.

Cutline: This coyote has its full winter coat for warmth; it resides at Wolf Park near Battle Ground. Photo by Frank Oliver. 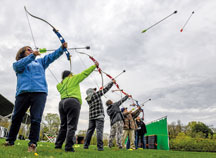 That's how long the shotgun Paula Wasko had inherited from her father sat unused. She wanted to take it out, but just the idea of doing so made her nervous.

Then, a few years ago, she heard about Indiana's Becoming an Outdoors-Woman (BOW) event. Participants could bring their own firearms or shoot those provided. BOW sounded like the perfect opportunity to test her gun, and her skills.

Turns out, she could operate it, quite well, in short order.

The instructors taught Wasko how to handle the gun and properly take care it, and told where she could continue to learn about its use.

"One thing led to another, and now I'm competing in shooting competitions in several states," Wasko said.

And more. A few months ago, she went turkey hunting and pheasant hunting for the first time by herself, on two separate trips, using not the shotgun, but another gun she had purchased as her second firearm.

"It was so much fun just walking out in the woods in nature," Wasko said.

BOW had lit a fire under her, giving her the confidence to pursue a passion she didn't know she had. Now she can't put it out.

"It was wonderful education and wonderful hands-on skills - I can go do it by myself now," she said. "I'm not afraid now, but I was afraid of firearms in particular."

Her quote summarizes the purpose of BOW - to familiarize women with activities like hunting, fishing, shooting, and outdoor survival skills, in a judgment-free environment.

Cutline: Different types of archery classes are a popular choice at BOW; other options at BOW include shooting clay targets, becoming a campfire gourmet cook, making a fur hat, and more. Photo by Frank Oliver.