The Last Mile a First Step for Justice-Involved Women

Building resilience is one skill 2020 has forced many of us to embrace, but bouncing back from life’s challenges is never easy. The difficulties we face from day to day teach us lifelong skills and build our resilience to weather future hardships.

Born and raised in Indianapolis, Jennifer Browning lived what many would consider a relatively “normal” life, aside from some recurring health issues. She graduated from college, took a job in the finance industry, married and had children. She had never been in trouble, never even received a traffic ticket. However, Jennifer’s health issues took a toll on her and eventually led to an opiate addiction. She lost her marriage, custody of her children and ultimately 18 months of her freedom.

While incarcerated, Jennifer learned of an opportunity to join a coding program. She went to the seminar, signed up for the program and was accepted along with 13 other women. Jennifer had only been in the program four months when she was released, but she knew she wanted to continue her journey into the tech world. 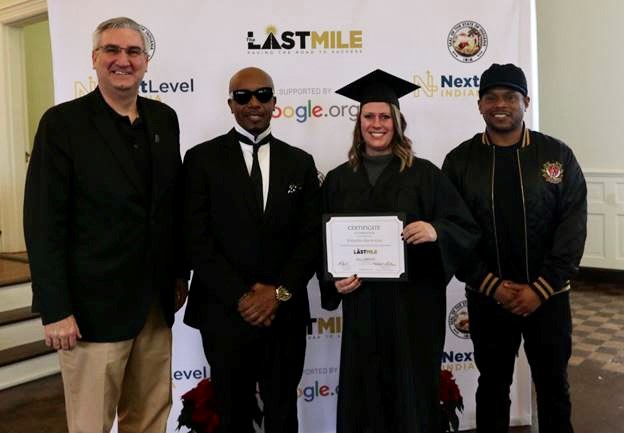 Gov. Holcomb, MC Hammer, The Last Mile graduate Jennifer Browning and DJ Sway Calloway pose for a photo during the graduation of the first cohort of the program at the Indiana Women’s Prison.

“I knew in the Midwest tech was really taking off, and it takes a certain kind of person to sort of be a software engineer, so I figured I probably had what it took - thinking analytically, problem solving - I knew I would do well with that,” said Jennifer. “I also knew I would struggle with sitting in front of a computer and not being social. I wanted something different, and I knew there would be a good amount of opportunity in tech. More possibility and less judgement.”

Jennifer reached out to several tech education programs, one of which was Kenzie Academy.

Kenzie is a design and coding school addressing the changes happening with technology, manufacturing and automation by equipping students with the skills needed to secure a job in the growing tech sector while leveling the playing field so students from all walks of life, especially those who have been underserved by traditional education systems, can succeed in tech.

Kenzie Academy Co-Founder and CEO Chok Ooi visited Jennifer while she was incarcerated and agreed to save a spot for her. Two weeks after being released, Jennifer joined Kenzie’s Software Engineering program.

She reached out to the school on Facebook and continued her tech journey with Kenzie. There she spent her first year learning Full-Stack (HTML, CSS, JavaScript, SQL, MongoDB, React and Django) and her second year working for Kenzie Studio, the company’s consulting arm, and creating applications specifically for Kenzie.

Kenzie is closely aligned with The Last Mile (TLM), a program preparing incarcerated individuals for successful reentry through business and technology training. TLM originally launched in San Quentin State Prison in 2010, and expanded outside of California for the first time in 2018 to Indiana’s Women’s Prison (IWP).

Working to change society’s perception about formerly incarcerated individuals, Jennifer leveraged both programs as a platform to tell her story. In the fall of 2019, Jennifer returned to IWP to see the program in action. “Telling my story creates a path of change for others and I give grace and time to others who struggle to understand what happened and where I am headed."

Graduates of the program would soon be released, and they wanted to secure jobs. When she realized no point person existed to coordinate efforts between TLM, the Indiana Department of Correction and the growing tech community, she boldly reached out to Commissioner Rob Carter to pitch the position and inadvertently created her dream job.

Today, Jennifer works diligently to create community partnerships for IDOC and its Workforce Reentry Team, with a strong focus helping TLM returned citizens continue to build their skills through apprenticeship and junior developer positions in our rapidly growing tech community. "Working and mentoring with The Last Mile participants before and after their release from Department of Correction proves to me daily I am on the right path and all of this happened for a reason, because we are all doing really well!”

Earlier this year, the IDOC won the Community Impact Award during TechPoint’s 21st annual Mira Awards for its collaborative partnership with The Last Mile. “The three of us put together a presentation including how we were involved in the program and how it changed our lives,” said Jennifer. “The judges were shocked when they realized all of us had been to prison for drug related crimes.”

Becoming more resilient not only helps you get through difficult circumstances, it also empowers you to grow and even improve your life along the way. “I never thought I would be a justice-involved citizen in the community I grew up and reside in today," noted Jennifer. "My capacity to recover quickly from the difficulties of my situation is what drives me daily."

“To create a community that accepts diversity, is inclusive, and is open to change has been a blessing and 2020 has brought us all an enormous opportunity to create a better way and I’m taking full advantage of it. All of the hardship isn’t for nothing!”

Secretary of Career Connections and Talent